FOOTE IN THE DOOR PRODUCTIONS
What's On

Tickets on sale now for Kiss Me Kate!

CLICK HERE for tickets!
Coming to the show? Check out our show program here! 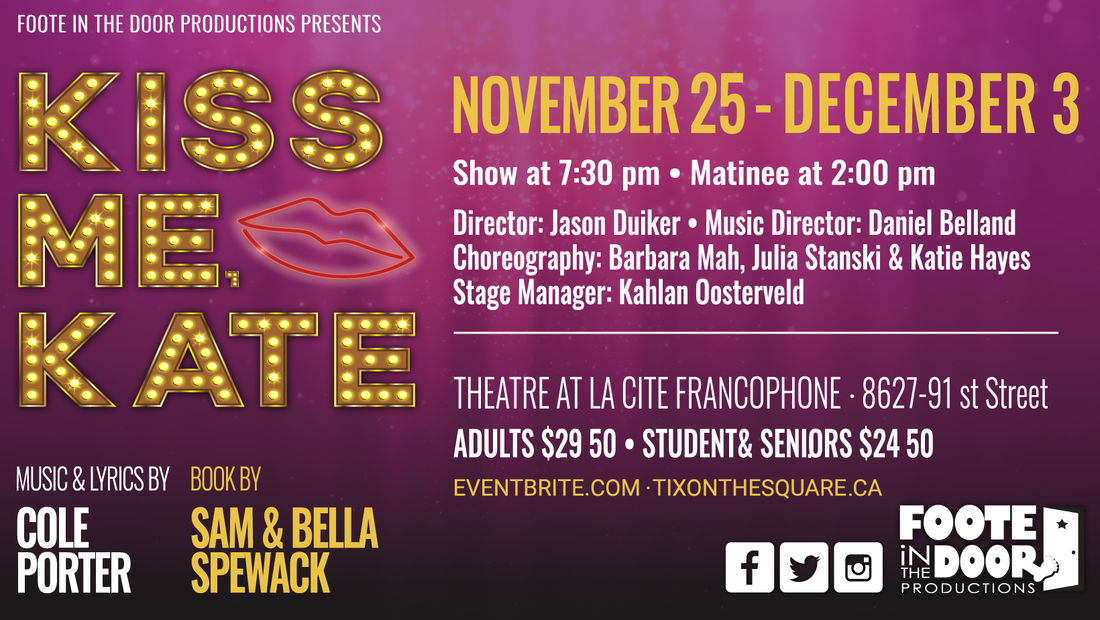 We are so pleased to announce the cast and crew for our fall production, Cole Porter's classic (and Tony Award winning) Kiss Me, Kate! Tickets will be on sale soon! 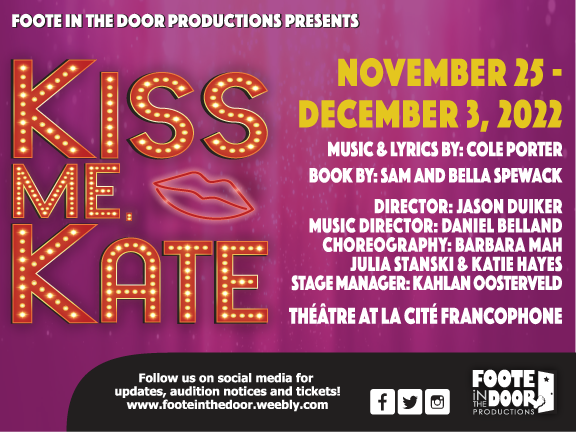 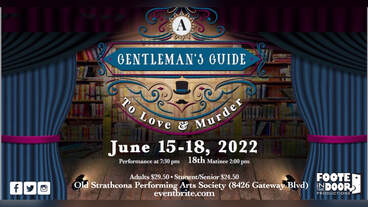 We recieved unfortunate news late this week that our intended theatre space at La Cite Francophone was flooded during a storm. Due to the level of damage in the space, they will no longer be able to host us for our production originally scheduled June 10-18.

We are very thankful that the Old Strathcona Performing Arts Centre (OSPAC) located at 8426 Gateway Blvd NW graciously agreed to host us for our production and that we will be able to maintain the original planned production with full staging and sets that you were expecting.
However, the dates for the show have been reduced due to availability of the venue.
​
Show dates are now as follows: June 15 to 18 (shows each night at 7:30pm) as well as an additional matinee June 18 at 2:00pm.

If you are one of our patrons impacted by show cancellations on June 10-12, please reply by June 7 and indicate if you would like to switch to another of the shows (please indicate date) or if you would like us to refund your tickets.

We greatly appreciate your understanding for these unavoidable changes - we made every effort to identify an option that best presents this Edmonton Premiere to our audiences
Thank you for your support!
Foote in the Door Productions.

Launching our first ever Adopt-an-Actor event for A Gentleman's Guide to Love and Murder! 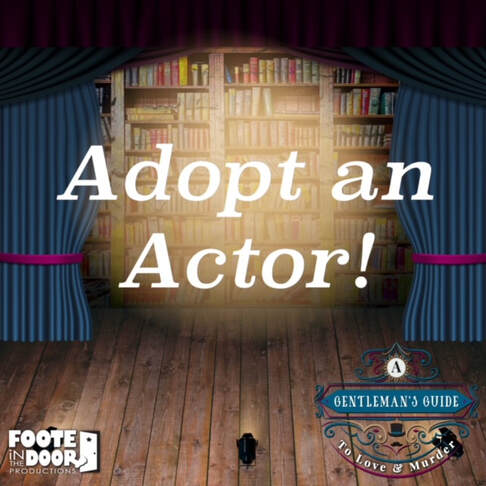 A Gentleman's Guide to Love and Murder - An Edmonton Premiere! Adopt our actors and help support our Edmonton Theatre Company!

We are so excited to bring audiences the Edmonton Premiere of the hilarious 2014 Tony Award Winning "A Gentleman's Guide to Love and Murder" June 10-18, 2022 at the Theatre at La Cite Francophone.

Interested in buying tickets to the show? Get them here! 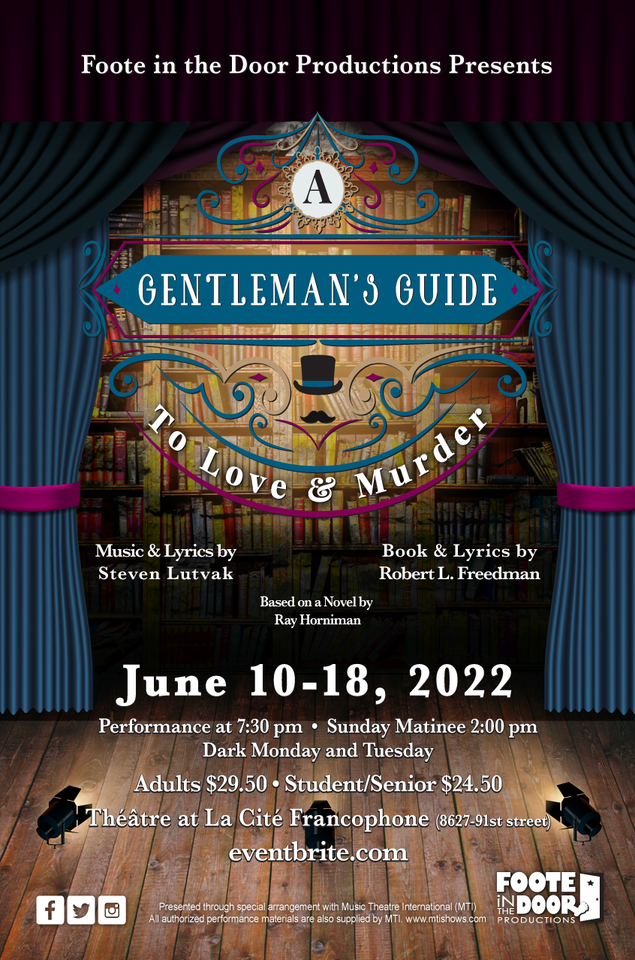 We are so excited to bring you the Edmonton Premiere of the 2014 Tony Award Winning "A Gentleman's Guide to Love and Murder" June 10-18, 2022 at the Theatre at La Cite Francophone.

A distant heir to a family fortune sets out to speed up the line of succession by using a great deal of charm... and a dash of murder.

A Gentleman's Guide to Love and Murder is the knock-'em-dead, uproarious hit and the most-nominated show of the 2014 season. With ten Tony nominations and four wins, including Best Musical, Book, Direction and Costumes, it also earned seven Drama Desk Awards (including Best Musical), four Outer Critics Circle Awards (including Best Musical) and one Drama League Award (Best Musical).
When the low-born Monty Navarro finds out that he's eighth in line for an earldom in the lofty D'Ysquith family, he figures his chances of outliving his predecessors are slight and sets off down a far more ghoulish path. Can he knock off his unsuspecting relatives without being caught and become the ninth Earl of Highhurst? And what of love? Because murder isn't the only thing on Monty's mind.... 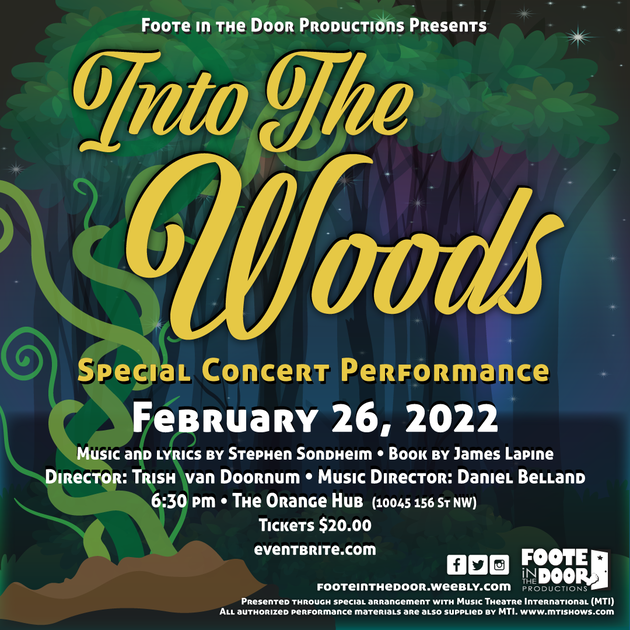 Following their sold out weekend at the Westbury Theatre, Foote in the Door Productions presents a one night encore Concert version of the Tony Award Winning INTO THE WOODS to open their 2022 season. With an all local cast, crew and orchestra, we bring you one of Sondheim's most popular works.
Best suited for ages 8 and up 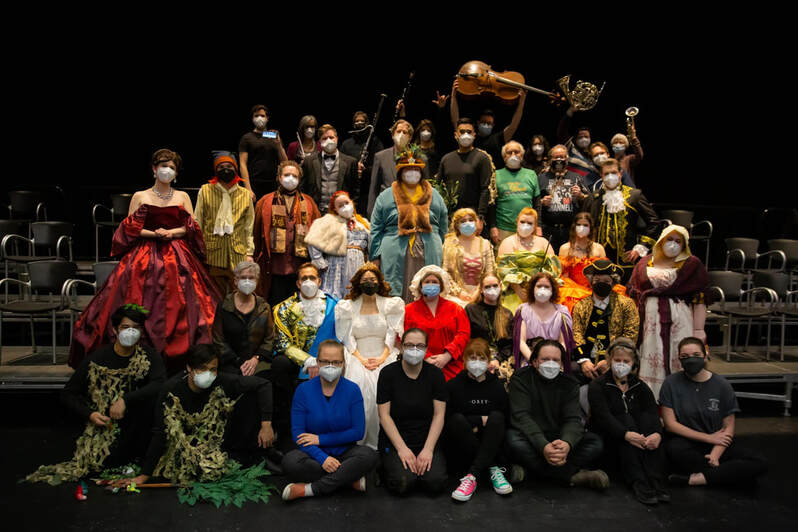 ​How quickly our weekend flew by and we closed our staged production of Into the Woods.

A huge thank you to all who came out to our quick weekend run! We were elated with the chance to perform live once more!

We have a special encore concert performance of our show on Saturday, February 26 (distanced seating) at the Orange Hub theatre (old Grant Macewan).

Tickets will be on sale very soon so stay tuned for details!

Once again, thank you for travelling into the woods with us this weekend! We are back! ​ 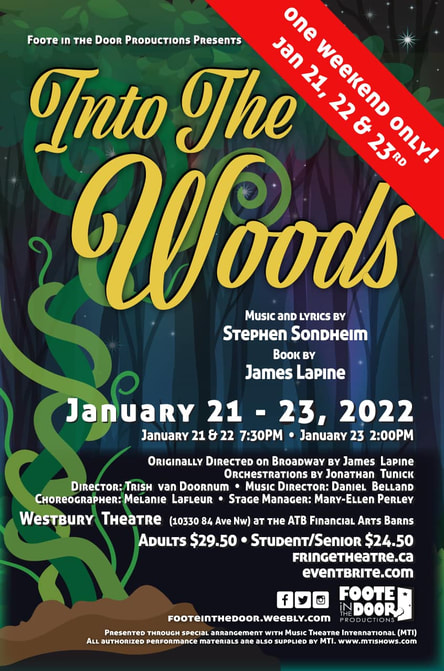 ​IMPORTANT NOTICE: Foote in the Door has made the difficult decision to reduce their show run to one weekend (January 21-23) due to the Covid surge in cases and to protect the health and safety of our team and patrons.

Foote in the Door has also made the decision to reduce capacity of the theatre to 50% and all patrons will be seated with social distancing by cohort. Masking is required in the theatre and lobby spaces.
Fringe Theatre also abides by the REP so all patrons over the age of 12 must show confirmation of vaccination or a Health Canada approved negative test within the last 72 hours.

Show times are as follows:
Friday January 21; 7:30pm (best availability)
Saturday January 22; 7:30pm (good availability)
Sunday January 23, 2:00pm (at capacity)
All ticket holders for affected dates have already been contacted to transfer or refund their tickets.
We are still incredibly excited to open our show on January 21 and show you all what we’ve been preparing since the fall!
​Thank you to everyone who attended Foote in the Door's Production of Disney's Beauty and the Beast, which ran from November 8-17, 2019. We were lucky to share this production with almost 3000 audience members and sold out many shows throughout our run. We loved seeing all of our audience members enjoying the show just as much as we did, performing it!

​Welcome to Foote in the Door Productions! We are an independent, local company, pleased to present classic, accessible musical theatre productions in Edmonton, AB, Canada.  FDP was selected as Gig City's Best Fringe Musical of 2019 for their production of The Marvelous Wonderettes.  FDP was also selected as the second runner up by readers for Vue Weekly's Best Of 2017 in the Musical Theatre category!

Foote in the Door believes in open casting and supporting a diverse production environment with the philosophy that art should reflect the diversity of the communities in which we live.

Check back for frequent updates!